Operations across Carlton's facilities were decentralized. Each location addressed its own needs for communications tools and other services. In 2017 the company began centralizing its operations, with responsibility for two-way radios reporting into the company's IT organization. Tuan Nguyen, Vice President of Technology for Carlton, took over responsibility for the radio fleet. It was a mix of VHF and UHF analog radios, cell phones, consumer radios, and pagers. Identifying a single point of ownership presented the opportunity for a unified communications structure for all facilities and employees.

Nguyen turned to Silke Communications, a leading wireless communications dealer. With roots in northern California, Silke has been serving the West from Oregon for 50 years, and has locations and/or networks in California, Oregon, Washington, Idaho and Nevada. The Silke team conducted an extensive coverage survey of all the sites and recommended the Hytera PD362 and PD352 digital portable radios. These radios feature analog and digital operation, single-line display, 256 channels, and up to 12 hours of battery life (ideal for a healthcare worker's shift). Nguyen said, “I liked the fact that the PD362 radios only weigh about 5 ounces and can easily fit in an employee's pocket.” Silke walked with Nguyen through the coverage trouble spots which are commonplace at healthcare facilities, and the Hytera radios proved loud and clear.

Carlton Senior Living took delivery of the Hytera PD362 and PD352 radios in 2017. These were the first PD352 radios used in United States. Silke programmed and assigned the channels, and radios were personally engraved for each user.

Radio communication is crucial to Carlton's day-to-day operations. There are 40 Hytera radios onsite at each location. Users include the housekeeping, medication, maintenance, culinary, and nursing teams. The Hytera radios help Carlton to provide a high level of patient care by integrating into the nurse call system. This system announces the voice alert on the radio and at the same time it converts pager messages into text alerts, which are displayed on the radio. Nurses can read or hear the messages on their radios, enabling them to quickly respond to patient emergencies. Two-way radios provide secure and reliable communications, even in times when cellular or Wi-Fi networks are down. During real emergencies such as fires, hurricanes, and earthquakes, two-way radios are still the only true communications device. The team at Carlton used their Hytera radios during the fire in Santa Rosa without any service interruptions.

Managers and line staff at Carlton Senior Living use their Hytera radios every day. The radios have become their lifeline for staff communication and most important, patient care. As Nguyen said, “We've been using the Hytera radios for nearly a year, and we are pleased with how they help us care for our patients. These are Hi-Def radios!”

We've been using the Hytera radios for nearly a year, and we are pleased with how they help us care for our patients. These are Hi-Def radios! 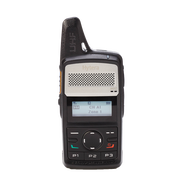