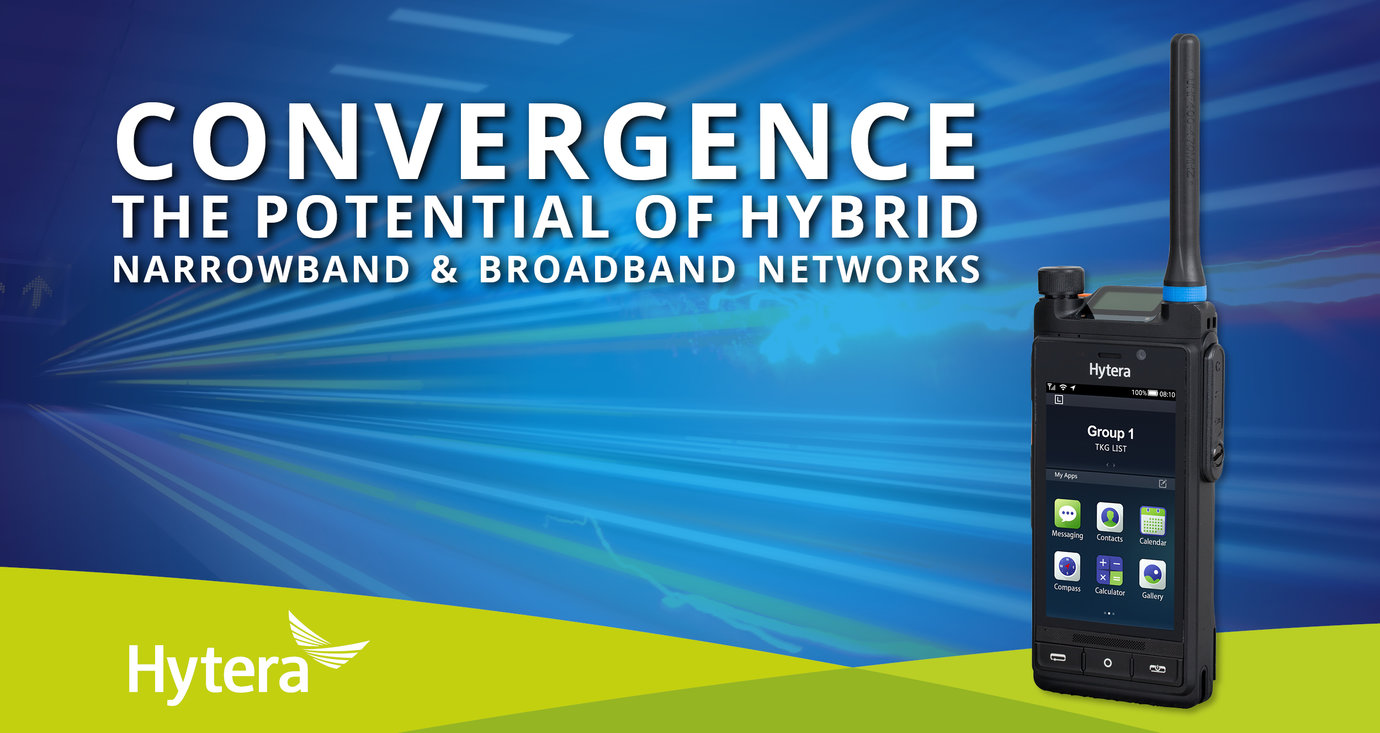 Each technology has its advantages and disadvantages. Put crudely, PMR is best for voice applications, including group and emergency calls, and 4G LTE for fast data services. If the two are interconnected to form a converged network then end users can enjoy the best of both worlds.

Modern digital IP-based PMR networks can not only provide utilities, airports, ports, logistics companies and many other industries with a resilient voice network, but they can also be used to transmit low bandwidth data, such as supervisory control and data acquisition (SCADA) as well.

However, if the MNO’s coverage is not adequate at, for example, a remotely situated power station, then the utility could install a private 4G LTE base station, plus LTE core, to boost local coverage.

This has become possible in recent years thanks to compact cell 4G LTE base stations, now available from Hytera and our subsidiary Teltronic. These can be deployed as fixed or mobile units in conjunction with an MNO.

By converging the two types of radio network, a device can transmit vital low bandwidth machine-to-machine (M2M) or Internet of Things (IoT) data over its IP-based PMR network. For example, a power utility company might use the network to automate parts of its power distribution system to enable real-time adjustments to changing loads, production rates, as well as technical supervision.

But gaining access to the world of fast broadband data is a major plus, as end users can send and receive images and video in the field and interrogate databases, which improves efficiency and productivity. Video can also be streamed automatically from remote or sensitive sites in the case of unauthorised entry or detection of faults.

Voice will continue to remain important, however. Voice applications in DMR and TETRA systems have evolved to provide a wide range of functionality not found in cellular networks. Due to the one-to-one calling protocols in cellular networks, the one-to-many and direct one-to-one mode (bypassing the network) communication features in PMR systems are missing in LTE. It should be noted, however, that these kinds of PMR features are currently being written into the LTE standard.

Taking the example of a power utility company again, a PMR system provides a resilient voice network to direct its field staff. The PMR system ensures that the user organisation does not have to rely on the limitations of mobile phone networks, especially in an emergency situation. It also allows managers and other staff who do not have a radio to communicate with staff equipped with PMR terminals via their mobile devices.

Hytera’s new Multi-mode Advanced Radio, the PDC760 (DMR) or PTC760 (TETRA) combines PMR with LTE, offering dual display and a rugged touch screen to manage narrowband and broadband communications. Converging on one device means staff do not have to carry two separate handsets to access the best in voice and data technology.

Others features like Proximity Services (ProSe) or Direct Mode Operation, IOPS (Isolated Operation), and Data Services, such as video PTT and group video broadcasting, are still under development.

Some vendors are providing proprietary ways to support these features, but then customers run the risk of vendor lock-in unless the solutions can be easily adapted to meet the standard once it is agreed at a later date.

Mission critical LTE is at a very immature stage of development. Customers may therefore wish to wait until the industry development cycle matures.

A key point is that interoperability between vendor solutions at the service level is not guaranteed yet by any open process similar to the IOPS (TCCA) process used for TETRA products. Customers wishing to purchase products from multiple vendors will want to be sure they can all work together.

Lack of spectrum for any kind of private LTE users is another major issue. Very few countries have allocated spectrum for private users yet. Even if they have or plan to do so, not all private users will be granted access to the spectrum.

Some countries may not allocate any LTE spectrum for private use, which means private users must turn to the licensed spectrum holders – usually commercial mobile operators – a solution that will not suit all customers.

Another consideration is the cost of deployment associated with an LTE-only mission critical network. Whereas TETRA and DMR are deployed mainly using lower bands (VHF and 380-450 MHz), allocated bands for private LTE are higher (700MHz, 800MHz, 1.4GHz, 2.3/2.6 GHz), so the number of sites/towers, OPEX costs, etc, are generally more expensive for LTE networks.

Thus, a model with 100% coverage in TETRA/DMR, and bubbles of LTE coverage where required seems to make the most sense, especially for large deployments.

Converged communication networks enable businesses to benefit from both technologies – retaining the field-proven resilient voice technology of DMR and TETRA, while accessing new fast 4G LTE broadband technology, which is becoming a necessity in an increasingly data-driven world.

If you would like to discuss your communication requirements, head over to our find a dealer page to speak with a local authorised partner.