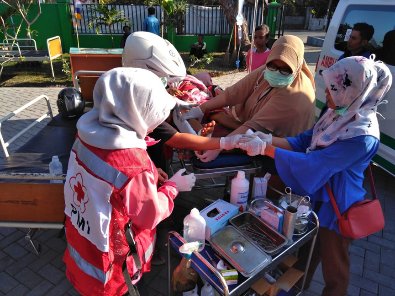 (Jakarta, Indonesia - August 10, 2018) A magnitude-6.9 earthquake hit the Indonesian islands of Lombok and Bali at around 6.45pm on August 5, 2018, with more than 90 people dead and hundreds more injured. The immediate focus is search, rescue and meeting the basic needs of people affected by the earthquake. To help improve collaboration efficiency in the search, rescue and evacuation, Hytera donated communications equipment in the first minute to Palang Merah Indonesia (PMI), the Indonesian Red Cross.

In the monring on August 6, Hytera Indonesian subsidiary in Jakarta set up an emergency response team and immediately contacted PMI, whose volunteers and staff were providing medical support to the survivors and helping to evacuate people from the coastal areas. After confirming PMI was in need of mobile communications support, Hytera emergency response team swiftly proposed a communications solution consisting of advanced DMR portable radios, mobile radios and repeaters.

On August 7, a joint meeting between Hytera engineers and PMI technicians was organized to go through the solution details and possible scenarios where the solution could be used for. At around 3pm in the afternoon, Hytera devices were handed over to PMI team, and Hytera emergency response team were standby to provide assistance for upcoming rescue efforts.

“I hope those donated devices could be used into the rescue as soon as possible, thanks for the help,” said Mr. Sunarbowo Sandi, Head of the PMI Headquarter, when receiving devices from Jerry Gao, Sales Manager of Hytera Indonesia.

In addition, Hytera CSR team in China headquarters contacted BlueSky Rescue and the East Asia of International Federation of Red Cross and Red Crescent Societies, expressing its sustained attention upon the disaster and willingness to provide further support to help rescue operations if it is needed.

Hytera, a leading global provider of innovative Professional Mobile Radio communications solutions, is committed to fulfilling its social responsibilities by leveraging cutting-edge technology and product portfolio to support rescue and relief operations on a global scale. Hytera played an active role in providing support to emergency response efforts such as the Japan Tsunami in 2011, the Nepal Earthquake in 2015, the floods in Myanmar in 2016, Hurricane Harvey in Houston, Texas in 2017 and Laos Dam Collapse last month.